News from Charlottesville has flooded the media this week and it is difficult to not be gripped by despair at the hatred that exists and fear for the future.

I don’t usually express my political feelings publicly, other than the important role that education has in developing responsibility and compassion in all, and for all, travellers on our planet.

Education will remain my focus for I believe it is the solution. However, I am writing in this context, as that is the context chosen by Charli Mills at the Carrot Ranch Literary Community when setting her flash fiction prompt to In 99 words (no more, no less) write a story that heals America. Difficult and idealistic, I know. Think about building bonds of trust or stories of friendship. It could be a positive story about America. Bonus points for hugging a cat.

Well, I don’t know about healing America. I think any healing needs to start with the self. This situation implores us to look at ourselves and see where our own attitudes can be improved. Australia’s history of treating its indigenous peoples is no more admirable. Recognition as people in our constitution was granted a mere 50 years ago.

On the last Friday of each month many writers join in the We Are The World Blogfest which “seeks to promote positive news.” It says, “There are many an oasis of love and light out there, stories that show compassion and the resilience of the human spirit. Sharing these stories increases our awareness of hope in our increasingly dark world.” Follow the link if you wish to join in with their mission to “flood social media with peace and love.” Or contact this month’s co-hosts  Simon Falk, Roshan Radhakrishnan, Inderpreet Uppal, Lynn Hallbrooks, Eric Lahti, and Mary J Giese.

Charli’s post reiterates the importance of creating connections through trust and friendship. With both these prompts in mind, I share with you some positive messages that shine a light in the darkness that sometimes seems overwhelming. (Apologies to #WATWB. I have broken the 500 word rule.)

“Truth is our greatest weapon against senseless evil. Fight with it. Fight for it. And don’t be discouraged.”

“If equality and diversity aren’t for you, then neither are we.”

Seven different equality symbols are displayed at the bottom of the poster along with the words,

“teaching tolerance and acceptance is not and should not be remotely political.”

After overhearing a homophobic remark made by an eight-year-old student, she embarked on a discussion of family, family composition, and what makes a family. The discussions continued throughout the school year and included other topics such as inequality and stereotypes.

At the end of the year she asked the children to write about the role of president and what they would do if they were the president. The boy who had made the “gay” remark earlier in the year, wrote:

What a wonderfully hopeful statement that supports the importance of education for the whole person, not just cramming them with a bunch of facts to pass a test. Surely the ability to live a life that honours and respects others is the most important test to pass.

Whoever You Are and I’m Australian Too.

While I’m Australian Too may be considered specific to the Australian multi-cultural situation, Whoever you are is suitable for reading to Little Ones, “whoever they are, wherever they are, all over the world.” 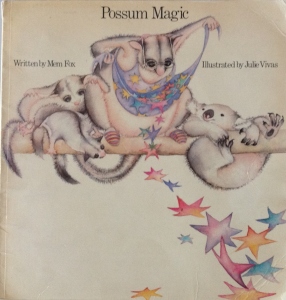 I was delighted to read that one of Mem’s books Possum Magic has been honoured by the Royal Australian Mint with its very own coin collection. Of course, I had to purchase a set or three, didn’t I? What a lovely celebration of a wonderful book by writer Mem Fox and illustrator Julie Vivas and the importance of children’s literature in general.

I have combined some of these ideas into my childish flash. I hope you like it.

She dumped the toys on the floor, then proceeded to arrange and rearrange them in groups. The largest group was of bears, a smaller group of cats, a few lizards, two puppies and an assortment of singles. With a finger tapping her cheek, she surveyed them. First, she dismantled the group of bears muttering about bows, hats and vests.  She hugged Tiger as she separated all the toys. Then Dad appeared with his briefcase.

“Which one to take?”

P.S. I hope I earned bonus points for hugging a cat!