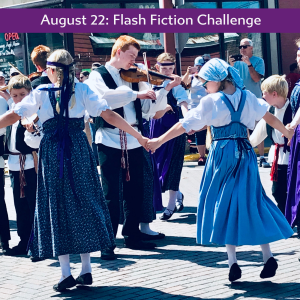 This week at the Carrot Ranch Charli Mills challenged writer to In 99 words (no more, no less) write a story about old world charm. It can be nostalgic or irreverent. You can invent an “old world,” return to migrant roots or recall ancient times. Go where the prompt leads you!

Born mid-way last century and unlikely to see the middle of this, from this angle anyway, I have to admit that I’m of the ‘old world’. The young ones think I’m ancient.

When my daughter, now an adult herself and ‘old’ to younger eyes, was but a child, she often asked me to tell her what life was like ‘in the olden days’ when I was a child. She even asked what the dinosaurs were like!

Although she teased, it has become entrenched in family lore. (Most family members have been obsessed by dinosaurs at some time — perhaps in the hope of locating ancestors?) But perhaps the juxtaposition is not that unlikely if one has not yet developed an understanding of the evolutionary timeline.

I’ve always appreciated the quote, often mistakenly attributed to Einstein, that says the only reason we have time is to prevent everything happening at once. There is another that questions whether, if a tree was to fall in the forest and no one was there to hear it, would it make any sound?

Could it be that for children, until they develop a sense of time, anything that has occurred outside of their memory, prior to their birth, seems to have happened all at once in that long ago, old world time.

The first children to have been born this century are already reaching adult status but it is difficult for them to imagine life before mobile phones, text messaging, iPads, social media, the internet, instant information, streaming and video games, let alone television. Even for some of us who experienced those ‘olden days’, it can be difficult to remember just what it was like.

This video of children reacting to rotary phones may help you recall.

How did we meet up with friends when we didn’t have phones, never mind mobile phones? What did we do when we were waiting for an appointment or an event and we didn’t have our phones for entertainment? What did we do when we wanted to know something and we weren’t at the library, beside a set of encyclopedias, or someone knowledgeable? No wonder our parents answered our questions with statements such as; “Because it is” and admonished us for asking too many questions. No child should ever have their questions shut down now with answers just a button away.

This year marks the 50th anniversary of momentous events such as the Moon Landing, Woodstock, and my final year of school. I may not have roamed with the dinosaurs, but how life has changed since then. My story reflects back on time in that ‘old world’. I hope you like it.

“What did you play on the iPad when you were little, Grandma?”

“There weren’t any iPads when I was little.”

“We didn’t even have computers.”

“What? How did you watch movies? On your phone?”

Grandma laughed. “No, we couldn’t watch movies on our phones. They didn’t have screens. And we couldn’t carry them in our pockets either. We went to the cinema to watch movies. When I was really little, we didn’t even have television.”

“Lots — played games, read books, made our own fun.”