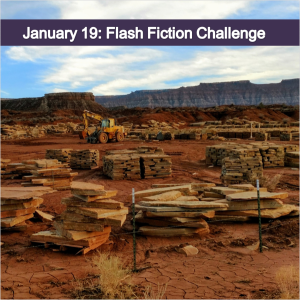 “In 99 words (no more, no less) write a about a quarry. It can be a place or include the the by-product. The quarry can be operational, abandoned, it can be in real-tie or mentioned from another time. Where will the quarry take you? Go where the prompt leads.”

I usually find Charli’s prompts a challenge but, with a bit of digging around in the old brain cells, I can usually concoct something with which I am reasonably happy. This time I’ve been scratching around the surface but have found little worthy of further investigation.

I considered a story of epic proportions, as I can’t think of a quarry without thinking of Gilgamesh.

Many years ago, I took my teenage son and a friend to a performance of the ancient story in a disused quarry. Whether it was part of their English or theatre studies, or what prompted the outing, I can’t recall. I think they were no more familiar with this “first great work of literature” than I; and I knew nothing. The performance made a lasting impression, both for its setting and the repetitious dialogue. I recall little of the hero’s epic journey. We were amused rather than awed.

From Gilgamesh, I considered play of a different, but more familiar kind: play in a sandpit or the dirt with diggers and trucks.

The sandpit was always popular for play at lunchtime, particularly if diggers, trucks, and other tools were available. Often the same children would play day after day, creating and re-creating the same scene with roads, rivers, bridges, and cities. Each seemed to have a particular role and responsibility. Found objects; like leaves, bark, feathers, sticks, and stones, would also be incorporated into the designs.

This play was great for the imagination, and for developing the friendship skills of cooperation and getting along, teamwork and working together. Surely I could find a story in there? But any ideas disintegrated faster than the sandpit structures.

It seems timely then, to revisit previous discussions of the difficulty experienced by children when expected to write to a prompt that may have little significance for them, and about which they may have little opportunity for discussion, reflection or planning.

I discussed this in both Writing to order – done in a flash! and Writing woes – Flash fiction. I suggested that, rather than  using a one-piece response to a prompt to assess children’s writing, the use of portfolios would provide more valuable information about children’s writing development.

A portfolio, similar to that of professional writers, would consist of work at various stages: some as ideas jotted on slips of paper, some in planning stages, others in draft form, others completed and waiting for the next step, and others in publication. Rarely would a piece need to be completed in one sitting, let alone judged for it worth on the spot.

However, that writers have a choice about responding to Charli’s flash fiction prompts, makes the process quite different from that experienced by children responding to a prompt as a requirement.

Writers have a choice whether to participate, in what genre to respond, and how to interpret the prompt.

In recent posts Charli has discussed the importance of accepting our first drafts as “raw literature”, as part of the process. She provide us with the opportunity to hone our writing skills, and share and receive feedback on our writing in a safe, supportive environment. Surely this is no less important when encouraging young writers.

Out of sympathy for the requirements imposed on children almost every day, I thought it only fair to respond to Charli’s prompt. This is it.

Old and disused, the bare earth was dry with no hint of topsoil or sign of life. Rock fragments, remnants of its past, littered the surface still pockmarked by tyre tracks. One wall, etched by diggers’ teeth, stood silently telling its story. Circles of ash littered with shards of glass and cigarette butts told another. But tonight it was to tell a story as old as time.  Where once huge trucks had carted away boulders carved from its interior, now rough timber platforms stood.  As darkness fell, flaming torches cast an eerie light as storytellers wove their epic tale.

31 thoughts on “Scratching around the quarry”