In a previous post To school or not to school I explored some issues I was grappling with as my daughter reached school age. I stated then that in future posts I would explore the effects of decisions I made upon my children’s (and my) education.

My daughter, Bec, now 26 and working towards a PhD in Environmental Management at UQ, has beaten me to the post by writing the following reflections on her schooling experiences. Who better to explore the effects upon her education than she herself?

When I was a wee girl I felt I had a very prolonged ‘childhood’. Not that I became a (painful) teenager later than others, or even an adult later; but more that the early years went for longer for me than they did for others. While other children I knew were in school, wearing uniforms and filling in worksheets, I was on my way into the Brisbane library with my mother, excited about the new books I would get to read. (I always anticipated the craft activities which were on offer, and specifically recall excellent activities related to owls.)

I also remember that when most other children were in school, I got to play with clay at home, and used the clay to create ‘exhibits’ for a zoo about my favourite animal. It was a great motivation to find out as much as I could about the animal, and I immersed myself in it. I started with rabbits (which I still love though have a real ethical struggle with given they’re such a disastrous environmental pest here in Australia) and then moved onto the Sulphur Crested Cockatoo.

Another memory, from my very long childhood, was that when most other children were in school, I set up at home ‘The Rainforest Club’, where I made a desk, a rainforest-related library, and a membership program. What was the point of the club? Who knows – but the evidence is still present in a number of Norah’s books which include markings on the inner cover to the effect of ‘This belongs to the library of the Rainforest Club’.

I remember frequent trips to the Sciencentre when it was in its old digs on the other side of the river, and a day starting with picking strawberries at a local farm, then bringing them home to mix into home-made strawberry ice cream. I also remember being very proud of myself when I got to cartwheel in a parade at the ‘Out of the Box’ celebration at Southbank. 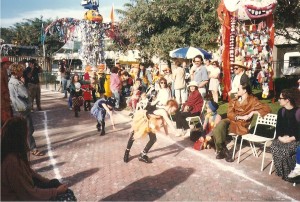 Then there was the day when an intimidatingly large cane toad launched toward me when I was sitting at the front of a group of children watching an engaging talk about animals (unlike the bunny rabbit, I am not quite so much torn between heart and mind about this invasive species, although increasingly it seems that the story of the cane toad in Australia reflects the story of post-1788 colonisation in Australia). A less traumatic animal experience was going on the ‘Batty Cruise’ down the Brisbane River as the macro bat colonies were stirring shortly after sunset. It was absolutely incredible – there were thousands of bats flying overhead – and an expert on board had a baby bat AND a baby echidna.

I also know Norah still has the story I wrote which explained all of the mysteries of neuroscience; “How the Brain Works”. Obviously, it’s a little man who lives in my brain, working efficiently with a series of filing cabinets.

What this little man didn’t work out at the time though – and only really worked through the files to figure out years later – was that despite not being at the time in School with a capital S, I was in school during every moment of the day and night during those early years. I LOVED visiting the library and the museum and the Sciencentre. I LOVED reading books, researching about animals, writing stories and experiencing my world. 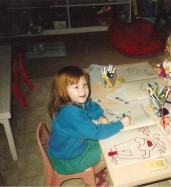 There’s no evidence in my memories that I was ever actively Being Schooled – I remember playing, spending time with my mother, going on fun day trips, and being creative. All of this, as far as I knew, without a formal lesson plan presented to me in the morning, without worksheets to complete (though I did spend a lot of time writing for fun – can you imagine such a thing?), without testing which would give me a reductive and quantitative measure of my intellect, abilities, and ranking against other children.

I started School with a capital S in grade 4, which was very hard to begin with.

The decisions which led to my enrolment in a School are absent from my memories of the time, but I think I remember that I wanted to be with other children. It makes me sad to think back on this, because I worry that as a child knowing nothing but my own life as the basis for all of my understandings about the world, that perhaps I didn’t appreciate Norah enough, and maybe I hurt her feelings when I wanted to be with other children. When I started School, I have a vivid and poignant memory on the first or second day being given a worksheet with no idea about how to complete it, as it was such a foreign concept. I felt out of my depth and incapable of fitting in, and I was upset. It took a little while to make friends (which resulted in a number of lonely lunch breaks), but once I did I was happy. I enjoyed most of the school work, and as far as I am aware my schooling experience from that point on was no more extraordinary than that of any other child at a state School. I missed being with Norah during the day but I was lucky that she was involved as a parent helper in my class, and then had a teaching position at my School.

I would like to offer some evidence of the impact that being home educated has had on my life, but I am not sure how to do this, after all, I’m the experiment and there’s no control for comparison. I can, however, say that I loved my childhood and I still have a very strong and driving love of learning.

Click on the link below to see some photos from Bec’s scrapbook.Photos from the scrapbook

These early photos portray activities that continue to interest Bec to this day: a love of animals and nature, an enjoyment in cooking and sewing, creative crafts, mathematics and writing.

9 thoughts on “Reflections on learning”