Lisa Reiter is writing her memoir and sharing her stories on her blog. She also invites others to join in and share their memories through her Bite Size Memoir prompt. Her prompt of the moment is “Interviews”.

In my role of teacher over the years, I have conducted many parent-teacher interviews, each with varying degrees of pleasure and stress. And that’s just for me! I have also sat on the other side of the desk attending interviews to find out about the progress of my own two children.

I mostly worked with children in their first year of school.

When conducting interviews with parents, particularly at the beginning of the year but at any time, I always invited them to talk first; to tell me their impression of how their child was going, to raise any concerns they had and to ask any questions they wanted answered.

There are a variety of purposes for beginning an interview in this way:

Often times I have found that parents share my concerns, and discussing them is easier when raised by the parent. One of the most difficult things is raising and discussing an issue of which the parent is unaware.

Over the years I have found that what parents most want to know is:

Is my child happy?

Is my child well-behaved?

Does my child have friends?

How does my child’s progress compare to that of others?

Prior to the interviews I would make a checklist of things I wished to discuss with each parent, including responses to the queries listed above and any other issues I wished to raise or anecdotes I wished to share, ensuring the positives always outweighed the concerns. I would gather samples of the child’s work to show and have at hand suggestions for ways the parents could continue to help with their children’s learning at home, which generally meant reading to them, talking with them, playing games together and possibly involving them in daily activities such as setting the table, writing shopping lists etc.

The media (Note: You are neither expected nor required to watch any of the videos included in this section. They are simply for my amusement and learning.) 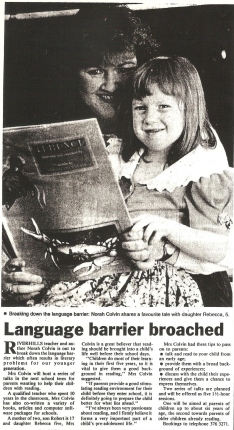 Just as an aside, at about the same time that I was being interviewed about butterflies for the program “Totally Wild”, Bec was also being interviewed at school for the same program. She is proud to say that the times she appeared on that program numbered three to my one! Not long afterwards she appeared on the news a couple of in anti-war rallies!

Bec and friend Elise talking about heating on “Totally Wild”

Of course, not all interviews occur face-to-face. Interviews can take place online too. During the 15 months that I have been blogging I have passed on a number of awards asking people to answer questions. This post is a compilation of the answers given to my interview questions by my first nominees.

Thanks, Lisa, for this opportunity to take a walk down memory lane.

Thank you readers. I appreciate your feedback. Please share your thoughts about any aspect of this post.